Monday, 10 August 2020_Clashes have erupted for the second day between Lebanese security forces and protesters angry at the government in the wake of the devastating explosion of August 4 in Beirut. 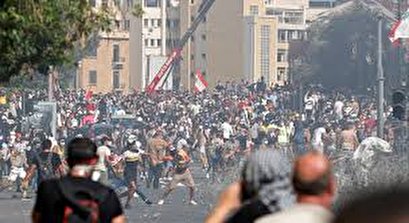 Riot police, wearing body armor and carrying batons, fired tear gas to disperse the protesters, who hurled rocks at security forces and blocked a road near the Parliament building.

The protesters are furious over the authorities’ handling of the situation in the aftermath of the blast. Public anger is also directed toward what people see as corrupt officials whose negligence led to the tragedy.

In the Martyrs’ Square, about 7,000 protesters demanded the resignation of those responsible, Reuters reported.

Nearly 730 people were wounded in the clashes.

One police officer was reported to have been killed.

On Sunday, Information Minister Manal Abdel Samad stepped down from her position, citing the failure of the government to carry out reforms as well as the explosion.