Tuesday, 11 August 2020_The pledge that came with demands for political and economic reform in Lebanon, was announced during an online donor conference of over 30 international leaders organised by the UN and French President Emmanuel Macron, one of the first leaders to have visited Lebanon’s explosion-ravaged capital Beirut, comforting distraught crowds, and promising to rebuild the city. 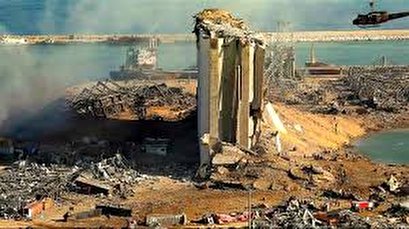 The French President’s overtures to Lebanon haven’t gone down well. His critics have denounced them as neo-colonialist, aimed at restoring sway over a troubled Middle Eastern land and distracting from mounting problems at home. Also in the donors’ meeting, US President Donald Trump who had earlier spoken of sizeable aid to Lebanon but stopped short of giving a dollar figure.

That drew immediate reaction from Tehran, an ally of Lebanon with close ties with Hezbollah. Iran's Foreign Ministry spokesman said "If America is honest about its assistance offer to Lebanon, they should lift the sanctions’’ and added the situation in Lebanon shouldn’t be allowed to be hijacked by certain groups or countries.

Absent from the conference, Turkey and Russia, both expected to provide aid as well. Turkey whose vice president visited Beirut over the weekend, says its ready to help rebuild the shattered port in the Lebanese capital.

Meanwhile, inside Lebanon, arrests and resignations, and protests over corruption at the highest echelons of power. Tens of thousands in the country have signed a petition to place their country under a French mandate for the next decade.

Whatever the cause, the massive Beirut blast has exposed the country’s many ills and the path to a full recovery, despite all the conditional international aid packages, will be a tough one.