Tuesday, 11 August 2020_Political analysts have cast doubt on the sincerity of French President Emmanuel Macron in his pledges of aid to Lebanon following a devastating blast in Beirut, saying Macron is exploiting the opportunity to advance the interests of Israel. 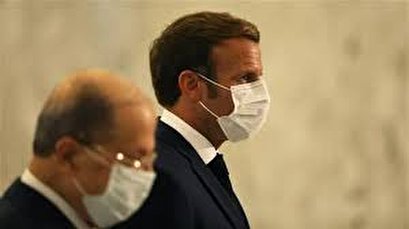 Elijah Magnier, journalist and political analyst from Brussels and Denijal Jegić, activist and scholar from Beirut, told Press TV that Macron’s recent visit to Beirut and his ensuing video conference with the world leaders to call for assistance to Lebanon were meant to ease maritime tensions between Israel and the Arab country in return for aid.

“As far as it concerned with Israel, Macron returned with the promise from the president to ease the maritime dispute between Lebanon and Israel” at a time when Lebanon is in need and is showing more flexibility, Magnier said.

He expressed regret over the resignation of Prime Minister Hassan Diab, describing him as a “rare honest prime minister that Lebanon has ever seen after Salim al-Hoss.”

The analyst said that Diab did not manage to register any success due to many problems he was facing, including the massive budget deficit and the resignation of several cabinet ministers, who are “the closest to the US and the West.”

“Everything was set up for this government to fail and everybody was insisting for it to fail,” Magnier said.

He said that Diab was “also attacked by the Arabs who refused to receive any delegation from the new government.”

“The Europeans and the US boycotted the Lebanese government, calling it the Hezbollah's government,” the analyst added.