Wednesday, 12 August 2020_Twitter has demonstrated a clear, consistent bias in favor of the US government and its geopolitical interests. The social media giant has also repeatedly lied about its policies on state-backed media outlets. 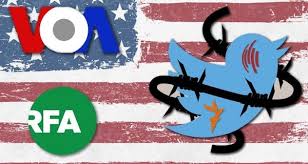 Twitter unveiled a new feature on August 6 that labels government-affiliated media on the platform. Users immediately pointed out the social network’s double standards: Chinese and Russian state-backed media have been designated, but not state-backed media outlets funded by Western governments.

Twitter Support claimed it decided to start labeling government-affiliated accounts from the five permanent members of the United Nations Security Council: the US, UK, France, Russia, and China. Oddly, state-funded media outlets from the first three NATO countries have not been labeled.

This is categorically false.

Twitter hosts a web page called the “Ads Transparency Center,” where it publicly discloses all of the paid advertisements, known as “sponsored tweets,” that the website puts into users’ feeds.

A search in the Ads Transparency Center for the official, verified Twitter account of the US government’s Voice of America, and specifically its Persian-language arm VOA Farsi, shows that the state-affiliated media outlet had paid Twitter to publish dozens of ads just in the first week of August.