Trump has left US 'in tatters', Biden and Harris say

Thursday, 13 August 2020 _Presumptive US Democratic presidential nominee Joe Biden and running mate Kamala Harris have launched a stinging attack on President Donald Trump, saying he has left the nation "in tatters" as Americans are "crying out for leadership" to overcome the triple crisis of the COVID-19 pandemic, racial injustice and a ravaged economy. 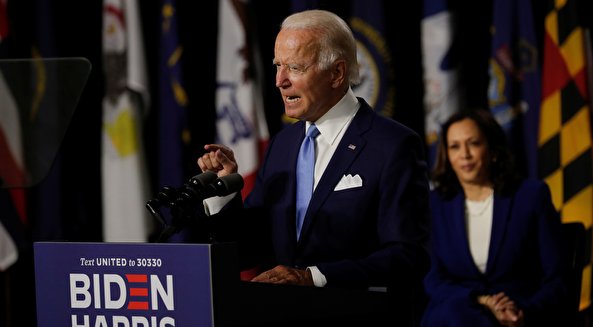 Making their first appearance as running mates at a Delaware high school, Biden and the newly-minted vice presidential nominee vowed to end Trump's presidency and "rebuild this country."

Harris said, "This is a moment of real consequence for America. Everything we care about, our economy, our health, our children, the kind of country we live in, it's all on the line."

The 55-year-old California senator and a daughter of immigrants attacked the US president as an incompetent leader, saying Trump "just isn't up for the job," as the country is at the crossroads.

She said “Trump inherited the longest economic expansion in history from Barack Obama and Joe Biden. And then, he ran the US economy straight into the ground."

“yet we have a president who cares more about himself than the people who elected him," she said.

"The case against Donald Trump and Mike Pence is open and shut," said the former California attorney general as she blasted Trump’s "failures of leadership" on containing the coronavirus pandemic.

Harris also tapped into the nationwide protests over racial disparities and police violence, saying "we're experiencing a moral reckoning with racism and systemic injustice that has brought a new coalition of conscience to the streets of our country demanding change."

The first debut of the Democratic duo came as Biden led Trump in most national polls and in swing states like Florida and Wisconsin.

The former vice-president, who will face Trump in November's election, promised that a Biden-Harris administration will do what it takes to "turn the corner on this pandemic."

Biden, 77, announced Harris as his running mate on Tuesday afternoon, thrilling black lawmakers and activists and drawing enthusiasm for the Democratic ticket.