Friday, 14 August 2020_Iraq’s al-Nujaba Movement says the ultimate goal pursued by all resistance groups is to destroy Israel and expel all American forces from the region. 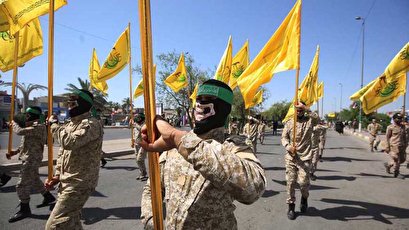 “Our goal today is not limited to victories here or there; rather, our clear goal is the full destruction of Israel and expulsion of the US and its mercenaries from the entire region and Islamic countries,” said Nasr al-Shammari, the deputy secretary-general and official spokesman for Iraq’s al-Nujaba Movement.

“In order to achieve this goal, we will avenge the cowardly assassination of resistance commanders, most importantly the martyred commander Hajj Qassem Soleimani,” he said on Thursday night.

He made the remarks in a video conference speech to an international conference held in the Iranian city of Mashhad to commemorate martyrs of Afghanistan’s Fatemiyoun Brigade, a resistance group involved in the regional fight against terrorism.

Al-Shammari said the fighters of Fatemiyoun and other resistance forces in Iraq are taking the “hard revenge” every day, and that is what American forces witness today.

“These fighters will continue to struggle against the US with stronger resolve, greater experience and with technologies the enemy can’t counter,” he added.

He said the defeats currently suffered by the US are an introduction to the ultimate humiliating defeat they and the Israeli regime will suffer.

“The enemy’s increased pressure … is what contributes to the realization of the resistance front’s goals and its great victory,” he said.