Friday, 14 August 2020_Turkish President Recep Tayyip Erdogan has warned Greece against any attack on the country’s vessel engaged in energy exploration in the Eastern Mediterranean, amid Ankara’s heightened tensions with Athens over oil and gas prospecting in disputed waters in the sea. 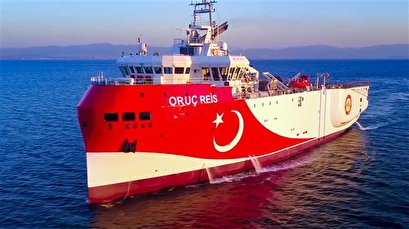 Erdogan raised the alarm on Thursday and said any attack on the seismic research vessel, Oruc Reis, which is exploring for oil and gas in disputed Mediterranean waters would incur a "heavy price" on Greece.

"We have told Greece if you attack our Oruc Reis, you will pay a heavy price. And they got their first answer today," Erdogan told his ruling AK Party members in the capital, Ankara, without providing further detail.

The Turkish president, however, underlined that the only solution to the country’s dispute with Greece over Turkish oil and gas exploration in the eastern Mediterranean was through negotiation and that Ankara was not seeking any "adventures" in the region.

Erdogan accused Greece of demonstrating an "ill-disposed" approach and called on Athens to respect Turkey's rights in the sea.

Ties between Turkey and Greece are in tumult over competing claims to natural gas reserves in the eastern Mediterranean.

The standoff between Ankara and Athens deepened on Monday after Turkey launched naval drills off two Greek islands and announced the resumption of its energy exploration research activity in the disputed area.

Turkey dispatched Oruc Reis, accompanied by naval vessels, off the Greek island of Kastellorizo, where Turkey disputes Greek maritime rights. Greece responded by sending its own military vessels to monitor the situation.