Israel’s disintegration to speed up after normalization: Leader’s advisor 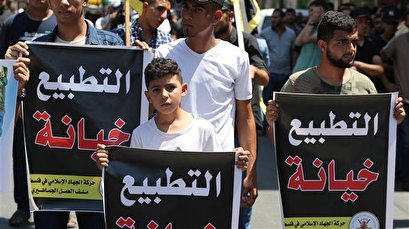 Ali Akbar Velayati, who advises the Leader on foreign policy matters, made the remarks in a statement on Saturday in his capacity as secretary general of the World Assembly of Islamic Awakening. The body was formed after the 2010 protests that sprung in Tunisia before spreading throughout much of the Arab world, toppling several tyrannical rulers.

The United Arab Emirates and Israel announced a deal enabling eventual full normalization of their relations on Thursday. It was met with uniform condemnation of all Palestinian factions, who called it a stab in the back of the Palestinians and sheer betrayal of their cause.

The General Staff of the Armed Forces of the Islamic Republic also released a statement on Saturday, strongly condemning the normalization agreement, but expressed certainty that the Palestinian cause would outlast Abu Dhabi's Crown Prince Mohammed bin Zayed, under whom the deal has been made.

It reminded that former Egyptian president Anwar Sadat ushered in the course of submission to Israel and its allies by joining in the efforts that led to the 1978 Camp David Accords.

“Now, bin Zayed is following in Sadat’s footsteps. However, Sadat is now being remembered by nothing but his name, while the Palestinian cause is alive and dynamic,” it noted, adding, “Before long, Zayed will perish too in the same way that Sadat did.”