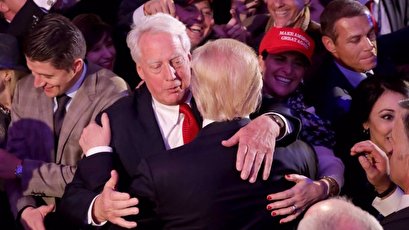 The president issued a statement following the death of his brother, who died after being hospitalized in New York. The cause of his death has not been disclosed yet.

“It is with heavy heart I share that my wonderful brother, Robert, peacefully passed away tonight,” Trump said. “He was not just my brother, he was my best friend. He will be greatly missed, but we will meet again. His memory will live on in my heart forever. Robert, I love you. Rest in peace.”

Trump had met his brother on Friday and said, during a news briefing in the same day, that Robert was "having a hard time" but did not provide details on his condition.

He had also been hospitalized in the intensive care unit for several days in June, reports say.

Although both Donald and Robert were longtime businessmen, they had strikingly different personalities. Donald once described his brother as “much quieter and easygoing than I am” and “the only guy in my life whom I ever call ‘honey’”.

“When he worked in the Trump Organization he was known as the nice Trump,” Gwenda Blair, a Trump family biographer, told the Associated Press. “Robert was the one people would try to get to intervene if there was a problem.”

Earlier in summer, Robert Trump lodged a lawsuit, seeking a court order to block the publication of Too Much and Never Enough: How My Family Created the World's Most Dangerous Man.

The tell-all book written by the president’s niece, Mary, is an unflattering memoir of the Trump family, which was finally allowed to be published. Mary Trump was also freed from an earlier gag order.