Turkey won’t back down against sanctions, threats amid Mediterranean standoff: Erdogan

Sunday, 16 August 2020 _President Recep Tayyip Erdogan says Ankara will never cave in to international threats and sanctions over its energy exploration in the waters of the eastern Mediterranean, which have been the subject of a territorial row between Turkey and Greece. 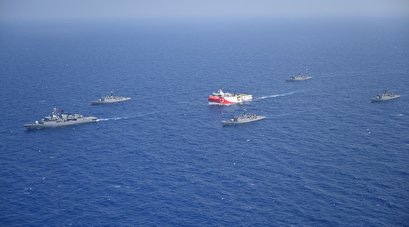 In a televised speech on Saturday, Erdogan defended Turkey’s exploration of oil and gas in the eastern Mediterranean, saying the measures are justified under both international maritime law and established conventions.

Vowing to continue its energy exploration as planned, Erdogan warned that he would not tolerate “banditry” close to the Turkish mainland.

“Our country is entirely in the right and we will continue to defend our rights, using all the means at our disposal,” the Turkish president said in his televised address.

“We will never bow to banditry on our continental shelf. We will not back down against the language of sanctions and threats,” Erdogan stressed, in a veiled rebuke of Greece and France.

The search for oil and gas in the contested eastern Mediterranean has pitted Turkey against its NATO ally, Greece, and, subsequently, the entire European Union bloc.

The standoff deepened on Monday after Turkey launched naval drills off two Greek islands and announced the resumption of its energy exploration activity in the disputed area.

Turkey has dispatched the seismic research vessel, Oruc Reis, accompanied by naval vessels, off the Greek island of Kastellorizo, where Turkey disputes Greek maritime rights. Greece has responded by sending its own military vessels to monitor the situation.