Sunday, 23 August 2020_Yemenis have taken to the streets to condemn any kind of normalization of relations with Israel. Here in the capital Sana'a, the demonstrators raised Palestinian flags and chanted slogans in support of the Palestinian people and said any normalization of ties with the Israeli regime was “a great betrayal.” 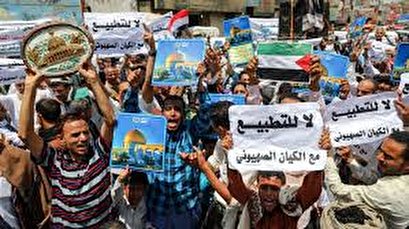 Protesters said the normalization deal between Israel and the UAE also reveals the main agenda of Saudi-led coalition war on the impoverished Yemen. Over the past week similar rallies were held in areas under the control of UAE backed Southern Transitional Council in Yemen.

Back on Thursday, Abdul-Malik al-Houthi, the leader of Yemen’s Houthi Ansarullah movement condemned the UAE’s agreement with Israel. He also censured efforts by certain Arab states to portray a good image of the Tel Aviv regime, emphasizing that such countries are actually turning a blind eye to facts, and telling lies in a bid to justify their normalization of ties with Israel.

Yemenis say they will remain behind their Palestinian brothers despite being involved in a devastating war by the Saudi-led coalition on their impoverished country.