Tuesday, 01 September 2020_Austria’s foreign minister has described the 2015 nuclear deal as the “most effective” diplomatic accord, calling for multilateral efforts to save it. 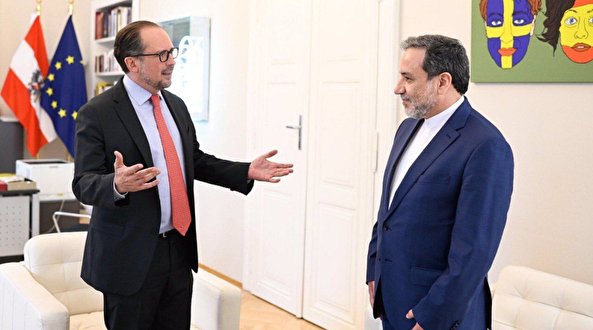 Alexander Schallenberg on Monday called on the remaining parties to the multilateral accord, officially known as the Joint Comprehensive Plan of Action (JCPOA), to live up to their commitments under the deal.

The Austrian top diplomat stressed that Vienna will continue its partnership to the JCPOA to rebuild trust in the region.

He made the remarks in a meeting with Iranian Deputy Foreign Minister Abbas Araqchi, who is in Vienna to attend a meeting of the JCPOA Joint Commission.

The meeting is to be co-chaired by Araqchi and Secretary-General of the European External Action Service Helga Schmid on September 1.

The event will be attended by representatives of France, Germany, Britain, China and Russia.

It will be held at the level of deputies and political directors of the foreign ministries of Iran and the P4+1 group of countries.

Araqchi is also to hold separate talks with heads of a number of delegations attending the Joint Commission meeting.

The JCPOA Joint Commission meeting is being held upon a letter sent in July by Iran’s Foreign Minister Mohammad Javad Zarif to Schmid regarding the non-adherence of European countries to the nuclear deal.

The upcoming meeting is particularly important as the US has illegally called for the reinstatement of UN Security Council sanctions against Iran.

US Secretary of State Mike Pompeo has announced that all UN sanctions against Iran will be reinstated at September 20 after the US “activated the snapback mechanism”. However, the claim was strongly condemned by other signatories of the nuclear deal including the EU, Russia and China and mocked by Iranian senior officials as the US has left the JCPOA in 2018 and has no right to use its mechanisms.

‘US not entitled to use snapback mechanism’

In comments on Monday, Iran's Ambassador and Permanent representative to the United Nations Majid Takht-Ravanchi said that the legal arguments by the majority of UN Security Council member states and the sum-up by its president are rigid and clear enough to indicate that the US is not authorized to use the snapback mechanism.

“On August 20th, through a letter to the Council, the US attempted to purportedly initiate a process to re-impose the Council sanctions on Iran. The reaction of Council members was decisive. Through their letters, again 13 members, including the remaining JCPOA participants, as well as Iran and the EU High Representative and the Coordinator of the JCPOA Joint Commission, strongly refuted the legal merit of the US letter,” Takht Ravanchi told a meeting of the UN General Assembly.

“Again, on August 25th, in an open VTC of the Council, the overwhelming majority of its members rejected the admissibility of the US letter,” he added.

“The arguments of the Council members, reflected in their letters and statements, are direct and straightforward: following its withdrawal from the JCPOA, the US is not a “JCPOA participant”, has no right to initiate a process to re-impose Council sanctions, and its letter cannot be considered as the qualified notification for the purpose of OP 11 of Resolution 2231, thus is void of any legal effect now and in the future, period,” the Iranian envoy noted.

“Having failed to convince the Council members through deceptive justifications, pseudo-legal arguments and arbitrary interpretation of Resolution 2231 as well as political pressure and intimidation, now, the US stubbornly argues that the sanctions will return on September 20.”