Wednesday, 02 September 2020_New footage has emerged from the occupied West Bank, showing Israeli forces brutally confront an elderly Palestinian man during a protest held near the city of Tulkarm. 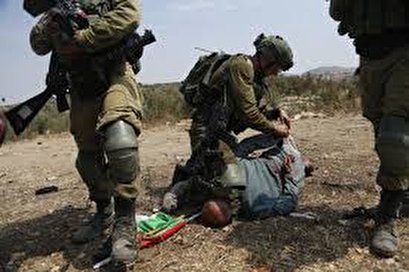 The video shows an Israeli soldier push the old man to the ground and kneel on his neck — a grim reminder of the US police violence and racial injustice that led to the murder of unarmed African American George Floyd in May.

The 46-year-old died after a white officer knelt on his neck and pinned him to the ground for nine minutes in Minneapolis, Minnesota.

Dozens of protesters were also injured in clashes in Tulkarm on Tuesday, with Israeli forces firing tear gas and live rounds to disperse the demonstrators.

The protests come against the Israeli regime’s plans to build new illegal settlements in a number of Palestinian villages near the northern West Bank city.

Tulkarm Governor Issam Abu Bakr, who participated in the protest, said the rallies would continue until the settlement project, which is a threat to Tulkarm, was halted.

US President Donald Trump’s so-called peace plan on the decades-old Israeli-Palestinian conflict envisions Jerusalem al-Quds as “Israel’s undivided capital” and allows the Tel Aviv regime to annex settlements in the occupied West Bank and the Jordan Valley. The plan also denies Palestinian refugees the right of return to their homeland, among other controversial terms.