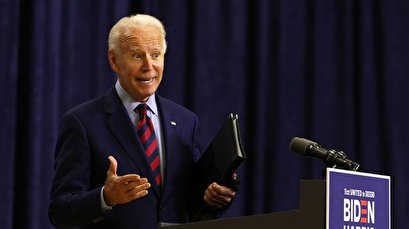 According to a report on Thursday in the Atlantic magazine, Trump described US Marines buried in a WWI cemetery in France as "losers" and "suckers" for getting killed in action.

The report said Trump had declined to visit the Aisne-Marne American Cemetery near Paris in 2018 because "he feared his hair would become disheveled in the rain.”

"In a conversation with senior staff members on the morning of the scheduled visit, Trump said, 'Why should I go to that cemetery? It's filled with losers,'" the article said.

"In a separate conversation on the same trip, Trump referred to the more than 1,800 marines who lost their lives at Belleau Wood as 'suckers' for getting killed," the report added.

In a statement on Friday, Biden said that if the Atlantic magazine's allegations are true, "then they are yet another marker of how deeply President Trump and I disagree about the role of the President of the United States."

"If I have the honor of serving as the next commander in chief, I will ensure that our American heroes know that I will have their back and honor their sacrifice -- always," Biden said.

Biden demanded that Trump humbly apologize to the families of fallen service members. Trump and a number of his aides have denied the report.

Trump, however, lashed out at the report on Thursday night, after his aides earlier called the allegations "disgusting, grotesque, reprehensible lies."

"Somebody makes up this horrible story that I didn't want to go," he told reporters.

"If they really exist, if people really exist that would have said that, they're low lifes and they're liars. And I would be willing to swear on anything that I never said that about our fallen heroes," he said.

"No animal, nobody, what animal would say such a thing?"