Sunday, 06 September 2020_Germany has threatened to impose sanctions on Russia over alleged poisoning of Russian opposition figure Alexi Navalny which left him in a medically-induced coma in hospital in Berlin. 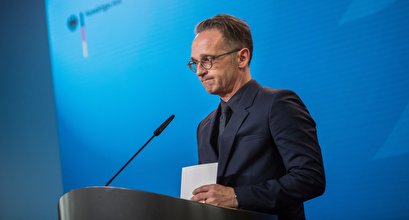 Foreign Minister Heiko Maas said Sunday that Germany, as the current head of the European Union (EU), will discuss possible sanctions on Russia.

“If in the coming days Russia does not help clarify what happened, we will be compelled to discuss a response with our allies,” Maas told German daily Bild. Any sanctions decided should be “targeted,” he added.

Navalny, 44, who had reportedly drunk a cup of tea at the airport prior to a flight from the Siberian city of Tomsk to the Russian capital of Moscow last month, collapsed on the flight and his plane was forced to make an emergency landing in Omsk due to a sudden deterioration in his health.

Navalny’s team claimed that the drink had been poisoned, accusing Moscow of poisoning the opposition figure and ordering a ban on transporting him in “an attempt on his life.” But he was soon airlifted to Germany for treatment.

German doctors at Berlin’s Charite Hospital, where Navalny was admitted to, said clinical findings indicated he had been poisoned with a substance from the group of cholinesterase inhibitors. They said the specific substance was unknown.

Russia has said its doctors who treated Navalny initially were much more transparent than the German doctors treating him now.

Germany claimed on Wednesday that Navalny had been affected by a Soviet-style Novichok nerve agent.

Kremlin spokesman Dmitry Peskov, however, said according to Russian doctors “it wasn’t a poisoning.”

“The German specialists managed to establish some kind of poisonous substance. We’re counting on a dialogue with our German colleagues,” he said.