US sends 500 troops to Lithuania for exercises near Belarus border

Sunday, 06 September 2020_The United States military has reportedly dispatched 500 soldiers to Lithuania to engage in war games near the border with Belarus. 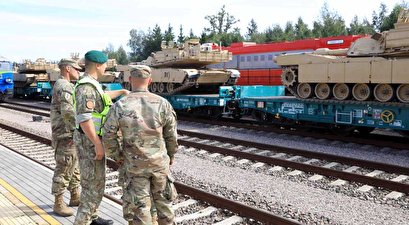 The deployment, to last until November, is “pre-planned and not associated with any events in the region,” a Lithuanian defense ministry statement said.

The US made the announcement along with commending Lithuania's investment on military warfare as more than a dozen Abrams tanks crossed the Lithuanian border from neighboring Poland on Saturday afternoon.

“This level of cooperation, training, security and, ultimately, stability has been made possible by the commitment of Lithuania in the investment of more than 2 percent of GDP on defense spending and modernization of its armed forces,” US Army Secretary Ryan McCarthy said.

American service members will deploy to Lithuania for the next “several years” to engage in “training side-by-side with our great ally,” he added.

Lithuania, Latvia, and Estonia have imposed travel bans on Belarusian President Alexander Lukashenko and 29 other officials over what they describe as the rigging of the August 9 election in Belarus and violence against protesters after the vote.