Sunday, 06 September 2020_An animals rights group is suing the US government to thwart a Connecticut aquarium's effort to get five new beluga whales, arguing in court that the aquatic animals would be harmed both from the trip from Canada and from being separated from other whales. 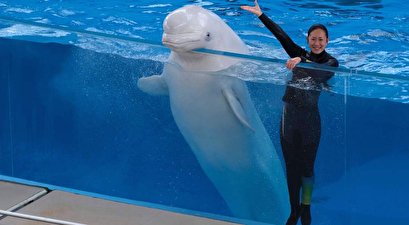 The Darien, Connecticut-based group, Friends of Animals, filed its lawsuit Thursday against US Commerce Secretary Wilbur Ross and the National Marine Fisheries Service in US District Court to stop a permit for the Mystic Aquarium.

The aquarium in Mystic, Connecticut, already has three beluga whales and it boasts of the largest 750,000-gallon outdoor habitat for whales in the US

Belugas, also known as white whales, are common in the Arctic Ocean's coastal waters and are also found in subarctic waters, according the National Geographic website.

They are classified as endangered in some parts of the world, and "near threatened" worldwide.

"Beluga whales do not belong in captivity," the lawsuit says. "They are highly social and intelligent animals who roam large distances in the wild. Captivity robs them on their most basic needs."

Neither representatives for the aquarium nor the National Marine Fisheries Service were immediately available for comment.

The proposed, 5-year permit cited in the lawsuit, says the aquarium seeks the animals for non-invasive research. The whales would not be allowed to be displayed used for entertainment for the patrons of the aquarium, and the animals could not be bred.

On its website, the aquarium defends the study of belugas in zoological parks and aquariums, saying that it has increased the understanding of factors that threaten the species.

"Mystic Aquarium is a leader in beluga research, care and behaviors," it states.