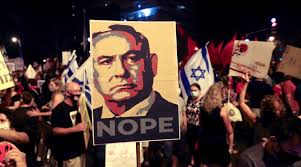 Thousands of Israelis marched Saturday night to Paris Square outside Netanyahu’s official residence, demanding he resign over corruption charges and his handling of the coronavirus crisis, which has led to soaring unemployment in the occupied territories.

Holding banners reading “Revolution” and “Get out of here,” protesters projected a sign aimed at the prime minister on a building reading in Hebrew, “Enough with you.”

Scuffles were reported as policemen attempted to stop the participants from veering off-path or crossing barricades.

Police said two officers were injured as demonstrators tried to bust through a police barrier.