Monday, 07 September 2020_After months of delay prompted by the coronavirus pandemic, a court hearing will resume in London on Monday where WikiLeaks founder Julian Assange will put up a legal battle against Washington's bid seeking his extradition to the United States. 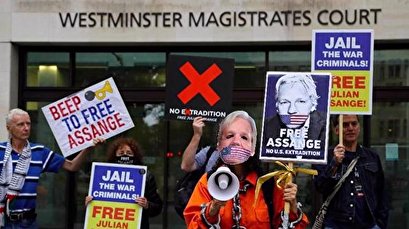 Assange lawyers and an attorney for the US government are scheduled to face off at the hearing, which is due to run until early October.

A prison van is expected to transfer Assange from London's Belmarsh Prison to the Old Bailey criminal court for the hearing.

Assange’s legal challenge in the UK got underway a decade ago, when he began fighting an attempt to extradite him to Sweden over allegations of sexual assault. Those charges, however, have since been dropped.

In June 2012, Assange sought refuge in the Ecuadorean Embassy in London to avoid extradition to the US, where he faces charges of conspiracy to commit computer intrusion.

In 2010, the whistleblower website WikiLeaks published a video showing a 2007 attack by US military Apache helicopters in the Iraqi capital Baghdad that killed a dozen people, including two Reuters reporters.

The US Department of Justice has indicted the Australian journalist on 18 counts, which include 17 forms of espionage and one instance of computer misuse crimes.

Assange, who denies the charges, said the documents exposed war crimes and human rights abuses by the US military in Iraq.

His legal team also argues that Washington charges against Assange are political and a threat to press freedom.

Assange, 49, could face years in prison in the US.

In April 2019, Ecuador finally revoked his asylum, allowing UK police to drag him out of the embassy after seven years.