Monday, 07 September 2020_US security forces have arrested another 15 pro-justice demonstrators protesting in the western city of Portland, Oregon. 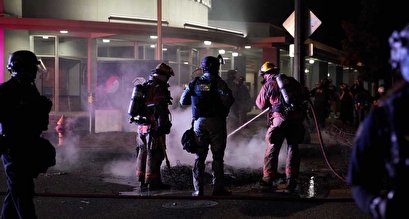 Demonstrations against police brutality and racial injustice in the United States in Portland have been going on a daily basis for more than three months..

On Sunday, the pro-justice protests continued overnight in front of the North Precinct Police building in Portland.

Protesters set fire on some mattresses that were later put out by firefighters, Portland police said in a statement.

The police said there were no injuries, adding that they had arrested 15 protesters on charges such as interfering with police officers' activities, disorderly conduct, possession of a dangerous device and reckless burning.

The protests came a night after Portland police arrested another 59 people while using tear gas late on Saturday to crack down on protesters throwing stones and Molotov cocktails at security forces.

Nightly protests have at times turned into violent clashes between demonstrators and security forces, as well as between right- and left-wing groups.

Protests erupted across US cities, and beyond, following the police killing in May of George Floyd, a Black man who died in Minneapolis after a  police officer knelt on his neck for nearly nine minutes.