Monday, 07 September 2020_Iran's Foreign Ministry says there is no link between a current visit by Swiss Foreign Minister Ignazio Cassis to Tehran and the issues existing between the Islamic Republic and the United States. 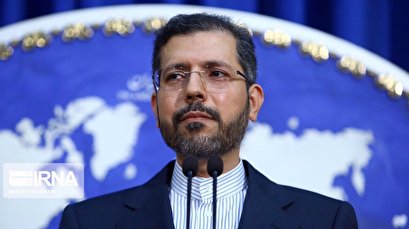 Addressing a press conference on Monday, Ministry Spokesman Saeid Khatibzadeh explained that it was a routine visit that had been scheduled to take place earlier, but was delayed due to the new coronavirus’ outbreak.

“We enjoy good and extensive relations with Switzerland,” he said of the European country that represents US interests in Iran.

Khatibzadeh, however, asserted that despite the “media speculations” trying to link Cassis’ trip to the US, “our policies concerning Washington remain the same.”

The US spares no chance to mount pressure on Iran, the spokesman noted.

As a case in point, he cited the US pressure that delayed Switzerland’s setting up of a financial channel that would circumvent the American sanctions targeting the Islamic Republic, for 20 months.

Khatibzadeh also pointed to Washington’s attempt to sway the International Atomic Energy Agency’s opinion about Tehran by contacting the UN nuclear watchdog’s Director-General Rafael Grossi before his recent visit to the Islamic Republic.

The Iranian official was asked about reported efforts by the United Arab Emirates and Israel to set up an espionage center targeting the Islamic Republic.

Abu Dhabi and Tel Aviv normalized their relations last month in a move that was vehemently condemned by all Palestinian factions, the Islamic Republic as well as several Muslim nations.