Tuesday, 08 September 2020_The Yemeni army has launched a series of retaliatory attacks against the Abha International Airport in Saudi Arabia’s southwestern region of Asir, using a squadron of domestically-manufactured Sammad-3 (Invincible-3) combat drones. 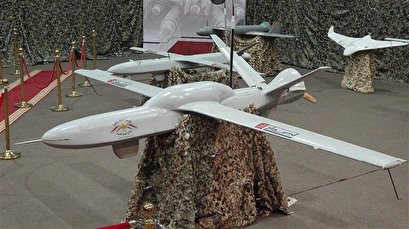 The spokesman for Yemeni Armed Forces, Brigadier General Yahya Saree, said in a brief statement posted on his Twitter page on Tuesday that the unmanned aerial vehicles struck the designated targets with great precision, noting that the drone attacks halted air traffic for several hours.

He added that the airstrikes come within Yemen’s legitimate right to respond to the Saudi-led coalition’s devastating military campaign and all-out blockade.

Saree reiterated that Yemeni soldiers and allied popular fighters will continue to carry out such strikes deep inside Saudi Arabia as long as the Riyadh regime presses ahead with its deadly aggression and siege.

The development took place only two days after Yemeni army forces and their allied fighters struck the same Saudi airport.

Sana’a airport to stops operations due to Saudi-led blockade

Separately, Minister of Transport in Yemen’s National Salvation Government, Zakaria al-Shami, roundly denounced the continuing Saudi-led naval and air blockade on his country, saying the Sana’a International Airport will soon stop its operations due to a lack of fuel.

Shami said all incoming flights by the United Nations and international humanitarian agencies to the airport will be suspended as of Wednesday because of the scarcity of oil derivatives needed to operate the facility.

“The coalition of aggression seeks to make up for its losses during ground operation by means of such acts. The continued detention of oil tankers and not allowing the vessels to offload their cargos at the port of Hudaydah have created a humanitarian catastrophe for Yemeni people, especially for patients receiving treatment in hospitals and newborn babies,” he pointed out.