Wednesday, 09 September 2020_Belarus’ opposition figure Svetlana Tikhanovskaya, who left the country for Lithuania after losing the presidential election to Alexander Lukashenko, says the protests in Belarus have never been directed against Russia. 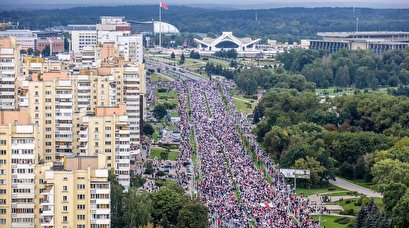 That was not the fight against Russia at any stage, and I am certain it will not be such,” Tikhanovskaya said in a special five-minute address “To Russia” posted on her Telegram channel on Wednesday.

Tikhanovskaya also urged Russians not to trust propagandistic media and politicians. “Do not let them damage relations between our peoples!”

“The peoples of Russia and Belarus have always been good neighbors and close friends,” she said, stressing that that would be the case in the future, too.

The comments come as Belarusian President Alexander Lukashenko is due to visit Russia on September 14. The planned visit was announced by Russia’s RIA news agency citing an unnamed diplomatic source on Wednesday. On Monday, the Kremlin had said Lukashenko would visit Moscow for talks “in the coming days.”

Protests, led by Tikhanovskaya, were held before and after Lukashenko’s landslide victory in the presidential election on August 9. The opposition has been demanding that the election be repeated.

Tikhanovskaya left Belarus for Lithuania after the election, and from there, she initiated the formation of a council for a transition of power.

The 66-year-old Belarusian president has dismissed allegations of vote rigging and refused to repeat the election, warning of a Western plot to destabilize the country.