Thursday, 10 September 2020_Turkey has condemned “arrogant” comments made by French President Emmanuel Macron on the simmering standoff between Turkey and Greece over sea boundaries in the eastern Mediterranean. 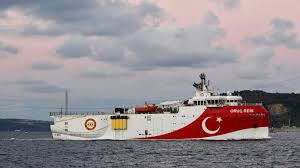 Turkey and Greece, both of them NATO members, have been at loggerheads over hydrocarbon resources and naval influence in the eastern Mediterranean. Ankara has dispatched a seismic research vessel — and warships to escort it — to an area in the sea that is disputed by Athens.

Greece, for its part, has ordered its naval vessels to shadow the Turkish ships. Earlier, one Greek and one Turkish naval vessel were even involved in a minor collision.

In a statement on Thursday, Turkey’s foreign ministry said that “Macron has again made an arrogant… statement,” adding that the French president’s comments were in fact a sign “of his own weakness and despair.”

Macron, who fully backs Athens in its growing standoff with Ankara, urged Europe earlier to show a united front against the “unacceptable” conduct of Turkey, saying Europe needed “to be clear and firm with the government of President [Recep Tayyip] Erdogan.”

The French president, who was preparing to host a summit of several EU Mediterranean nations - EuroMed 7 - aiming to coordinate a tougher response to Turkey in its current standoff with Greece, also said that Turkish people “deserve something” different to the way their government currently behaved.