Thursday, 10 September 2020_People have gathered in the Iranian capital, Tehran, in protest at a French satirical publication’s reprinting of blasphemous cartoons of the Prophet of Islam, and recent desecration of Islam’s holy book in Sweden. 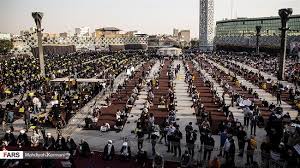 The rally took place at Tehran’s Imam Hussein Square on Thursday, denouncing such defamatory actions as part of Islamophobic schemes pursued by the United States and the global Zionist lobby targeting the freedom-minded people and countries of the regional resistance front.

The demonstration was held amid strict observance of health precautions given the ongoing outbreak of the new coronavirus, with sanitizers and face masks being distributed among the participants, who, themselves, took note of social distancing rules.

The French weekly, Charlie Hebdo, reprinted the blasphemous caricatures earlier on the eve of the trial of suspects in a deadly gun rampage on its office in early 2015.