US is fascist police state run by Wall Street crowd

Thursday, 10 September 2020_The Washington Post wrote a very surprising editorial piece, by their editorial page editor, really surprising. The Post and the Times and most of the US media go all out to bash Trump, not for the right reasons, for the wrong reasons. It's unusual to take on a member of this regime and bash that person, but that's exactly what the Washington Post did. 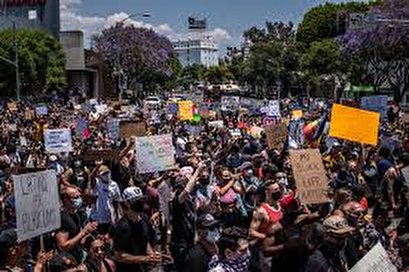 Last week they wrote an editorial piece bashing Pompeo calling him, “the worst Secretary of State in US history.” Well, I couldn't have said it any better myself. I thought Hillary Clinton was the worst while she was around. And I do believe that very strongly. And Pompeo -- it was mostly -- I didn't know anything about him, he was a congressman but you know there were 435 of those. So none of them really stands out that much. Some more than others but they're really faces in the crowd for the most part.

But when Trump first picked him to be CIA director, where he said that “We lie we cheated we stole” in his remarks. Amazing he would say anything like that, which is true. And then, Trump kicked him up to be the Secretary of State, which, that position is responsible for forming US foreign policy on a global basis. Trump is a geopolitical-know-nothing and I’ve stressed that many times. Pompeo, I don't know what he knows about geopolitics, but he's in charge of it anyway. And I agree, he is the worst, the most dangerous, that's the way I would put it, the most dangerous US Secretary of State. He is not a diplomat. He's an anti-diplomat. And he's alienated one country after another. Doesn't matter if he alienates US adversaries, but there are a lot of people in Washington they would get the Post to write an article like this because he has alienated US allies and that's a no no.

He's a guy with presidential ambitions in 2024. Heaven help us if he runs and if he was ever elected. There's no place to hide now. There certainly would be no place if he was president. He's a maniac and any country that doesn't bow down to the US he wants to attack, and I mean Trump got rid of John Bolton because he wanted to attack everybody. Pompeo was a little smoother. At least the rhetoric he uses in whispering in Trump's ear, let me put it that way, is basically going along with Trump where Bolton was outspoken. I despise the two of them. I respect Bolton more than I do Pompeo. I think of the two, but Pompeo was more dangerous. So indeed, it's very very true.

Eh, the November 3 election, there is an all-out campaign in the media. There are exceptions but the great majority of what I call establishment media in the US are going on all out to see that Biden is elected and Trump doesn’t get a second term.

Well, I asked, “Why do we only have a choice between these two which is no choice at all?” I call the choice between Biden and Trump choosing between death by hanging or a firing squad and that's what it comes down to. When it comes to major issues, wars, NTPs, pro-wars, corporate empowerment, police state laws, things like that, both wings are what I call the US war party, they're on the same page.

They support the same policies. The difference between Trump and Biden on these issues in style and party label, other than that, they are the same. The difference in other issues, but they're all important, but some are more important than others, but certainly the ones I mentioned, go right to the top of the list of what's most important. And those Biden and Trump are the same. I don't know what Biden knows about foreign policy. He has been around in Congress, and his vice president since 1973, nearly half a century.

Trump was a businessman, a geopolitical-know-nothing I think. So he's led around by Pompeo and other people in the State Department and so on. Maybe they run the people who get his attention as well, but either he or his son in law Jared Kushner, or any of his family members they know nothing about politics and the geopolitics. So they rely on other people to steer them. Well, the other people are in this regime, hard right extremists and whether one leaves and somebody else comes in, they're all the same. They are pro-war with all the risks. Terrible. But if Americans believe that things will be better if Trump is defeated and Biden succeeds them, they are just as foolish as they've always been.

Anytime the voters throw out the bums in Washington the only thing they get is new bums, following the same policy, what I called continuity, like dirty business as usual, and that will be the result of the November 3 elections, whoever's elected president, whoever wins key congressional votes.

There are some good people in Congress, but there are very, very few and nobody in power is anything but a-dirty-business-as-usual-politician. And these are the ones that will run the country next January whether it's Trump, Biden or anybody else. It's the way it's always been in the US. There was one exception.