Friday, 11 September 2020_It’s been 19 years since the mother of all false flags, the controlled demolition of the World Trade Center and the insider attack on the Pentagon. 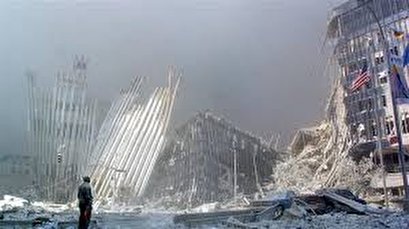 He is a professor of history at the University of Virginia, who predicted a few years before 9/11, that there would be a coming catastrophic event, consisting of the destruction of the World Trade Center, that would radically change the politics and collective psychology of the United States of America.

Dr. Zelikow predicted this in the 1998 article in Foreign Affairs Magazine, the flagship of the Council on Foreign Relations. And in that article, co-authored with John Deutsch, Zelikow essentially told us that as a self-professed expert in what he calls "the creation and maintenance of public myths”—and his first example of a public myth is the myth of the dastardly Japanese surprise attack on Pearl Harbor that brought the US into World War Two—that as an expert in public myths, he can see that a coming catastrophic event, such as the destruction of the World Trade Center—and remember this is being written in 1998—would have this tremendous impact on America, dividing time into a before and an after. And in the "before," people were still living in a constitutional republican regime, or at least they thought they were, and after there would be massive crackdowns on civil liberties and there would be a whole new world.

So that was quite an interesting prediction, made in 1998 by Philip Zelikow who would go on to become the essentially sole author of The 9/11Commission Report, the official US government version of what supposedly happened that day. And this and other coincidences around Philip Zelikow have led many to suggest that Dr. Zelikow is a prime suspect. As one of the scriptwriters, perhaps a lead scriptwriter for the 9/11 false flag Hollywood style event, somebody who wrote the script for it in advance, Zelikow was charged with covering it up and putting out a ridiculous thriller novel called The 9/11 Commission Report. He presumably produced his novel, posing as an official government report, based on the script that he, perhaps along with others, had written before 2001, because this event was very carefully orchestrated.

It was a trauma-based mind control event, designed to traumatize the American people by showing them horrific images on television, confusing them at first about whether the images were real or simply a Hollywood movie of some kind, and pushing them into a kind of cognitive dissonance, which would paralyze them and allow the authorities to ram a new agenda of war and Orwellian fascism down their throats. And that's precisely what Zelikow and the other authors of the 9/11 false flag did to us here in the United States.

We've now spent more than $7 trillion on the 9/11 wars, which were entirely designed to benefit Israel. Remember Dr. Zelikow is a hardcore neoconservative Jewish Zionist as are all the other members, with a couple of minor exceptions, of the Project for the New American Century, which called for that 9/11 new Pearl Harbor exactly one year before it happened in their manifesto Rebuilding America's Defenses, which was a rewrite of Netanyahu's "Clean Break" document.

So all of this was designed to trick the United States into going to war to destroy the Middle East on behalf of Israel. And that's precisely what happened. $7 trillion American dollars later, the Middle East is largely in smoking ruins—although they haven't managed to go to all-out war against Iran yet, but they're still working on that. And