Outcome of a disputed US vote: A ‘Hot Fall’ or an ‘Icy Crusade’?

Outcome of a disputed US vote: A ‘Hot Fall’ or an ‘Icy Crusade’?

Saturday, 12 September 2020_In the 21st century a disputed vote in the US presidential election is almost a 50-50 proposition: if November’s popular and electoral college votes do not correspond, yet again that would mark the third such occurrence in the last six presidential elections. 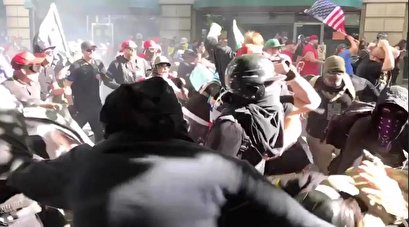 A disputed vote has produced dramatic changes: the disputed election of Republican Rutherford (also known as “Rutherfraud”) B. Hayes in 1876 forced a political bargain which saw Democrats win the withdrawal of Northern post-Civil War troops, thus ending the Reconstruction Era and the integration of African-Americans after a scant 11 years of efforts. Perhaps the most notable point here is just how long the Republican/Democrat duopoly has dominated the United States - the Democratic Party is the oldest voter-based political party in the world, and the entrenched privileges they and Republicans have colluded to cement preclude the rising of any third-party outsiders.

And yet this year we have Donald Trump, who is a genuine political outsider.

It’s vital to remember that Trump was rejected by the Republican establishment all the way up until the eve of the Republican National Convention in May 2016. While the mainstream media and Democrats immediately and incorrectly assumed Trump was as solid a Republican as Abraham Lincoln - mainly because everything must fit into their simple “us vs. them” straitjacket of a worldview - Trump supporters knew better.

The primary catalyst for Trump’s election was his promise to “drain the Swamp” (not literally, even though Washington D.C. was constructed on former swampland), and that promise was not limited to just “Crooked Hillary” but political creatures of both parties. Indeed, the common lament over the past four years among Trumpers is that he has not fulfilled his campaign promise to lead a China-like drive against corruption because “they won’t let him”, and “they” includes Republicans as well.

Trump still preserves this outsider status because he is still not a real politician - he lacks a coherent ideology and a grassroots base to implement it - and this is why he leads no actual third party threat. This is unlike someone whom Trump hopes to join on Mount Rushmore: Teddy Roosevelt, who in 1912 was able to form the last major third party in the US - the Progressive Party (this party is often referred to as the “Bull Moose Party” in modern America, obviously to hide the party’s leftist basis), which eventually reconciled with the Republicans after the “clearly insane” (per author Mark Twain) and rabidly imperialist Roosevelt sold out already rather right-wing US progressivism.