Saturday, 12 September 2020_US Republican Senator Lindsey Graham had reportedly warned President Donald Trump of the escalation of Washington-Tehran tensions into an “almost total war” before Trump ordered the assassination of top Iranian anti-terror commander Lieutenant General Qassem Soleimani in the Iraqi capital of Baghdad earlier in the year. 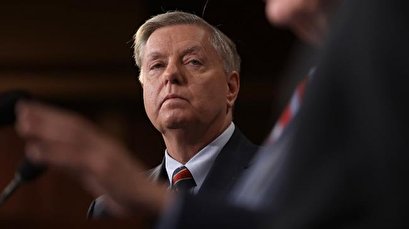 In a bombshell book by journalist Bob Woodward that some sections of it was released on Thursday, Graham is said to have implored Trump not to assassinate the senior Iranian commander and warned that the heinous act would spark an “almost total war.”

Graham cautioned the US president while golfing in Florida a few days before the assassination against taking the “giant step,” which he described as “over the top.”

“This is over the top,” Graham said, according to an excerpt from the book. “How about hitting someone a level below Soleimani, which would be much easier for everyone to absorb?”

The Republican senator warned at that time that the targeted killing of Soleimani would trigger an “almost total war,” and was like going from “playing $10 blackjack to $10,000-a-hand blackjack."

General Soleimani, former commander of the Quds Force of Iran’s Islamic Revolution Guards Corps (IRGC), was assassinated in a US airstrike at Baghdad airport on January 3, along with Abu Mahdi al-Muhandis, the second-in-command of Iraq’s Popular Mobilization Units (PMU) counter-terrorism force, and a number of their companions.

The strike came while General Soleimani was on an official visit to the Iraqi capital.