Thousands protest outside Netanyahu's residence, urge him to resign

Sunday, 13 September 2020_Thousands of Israeli protesters have demonstrated outside Prime Minister Benjamin Netanyahu’s official residence in the occupied Jerusalem al-Quds, calling for his resignation over corruption and mishandling of the coronavirus pandemic. 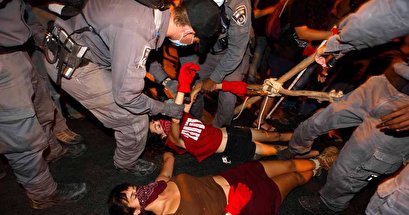 The Israeli police have reportedly detained several protesters in the course of the latest round of demonstrations.

The Saturday protests, which were being held for the 12th consecutive week, came a day after Israel announced an agreement to establish diplomatic relations with Bahrain, the second Arab country to normalize ties with Israel in under a month and just the fourth overall.

However, the surprise announcement had little effect on the thousands of demonstrators, who have been gathering outside Netanyahu's residence every Saturday throughout the summer.

Protests against Netanyahu over his corruption trial have expanded to include demonstrations against his handling of the health crisis and the resulting economic pain.

Netanyahu has come under criticism for reopening the economy too quickly in May.

Many struggling workers and business owners fear another closure will be devastating. Many of the demonstrators are unemployed.

The previous round of protests, held last Saturday, had resulted in clashes with the Israeli police, which arrested 12 demonstrators.