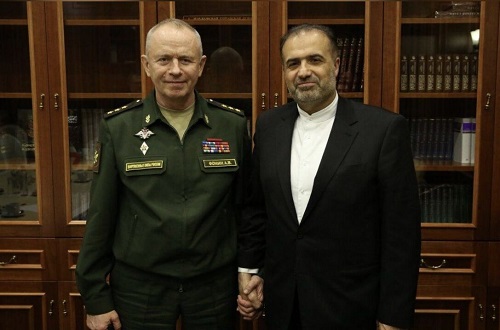 In his remarks during a meeting with Iran’s ambassador to Russia, Kazem Jalali, Russian Deputy Minister of Defense, Alexander Fomin, described Iran as a “friend, partner and ally”.

The meeting took place in the Russian Defense Ministry and the issues of cooperation between Iran and Russia in various fields such as military and defense cooperation as well as coordination on the 2015 Iran nuclear deal (JCPOA) were discussed.

The meeting follows closely after a visit by Iran’s Defense Minister Amir Hatami to Moscow in which he discussed military issues with Russian officials.

In that meeting Hatami pinpointed that “I am sure that the joint strategy adopted by Tehran and Moscow in solving the regional problems can bring peace, stability, and security to the region regardless of the United States’ unilateral policies,”

For his part, his Russian counterpart highlighted that it was essential to expand regional cooperation to establish peace and stability.