Philippines deports US soldier convicted of killing a woman

Sunday, 13 September 2020_The Philippines has deported a US soldier convicted of killing a woman in the country six years ago, days after President Rodrigo Duterte granted him an absolute pardon, in a controversial move that sparked widespread outrage across the nation. 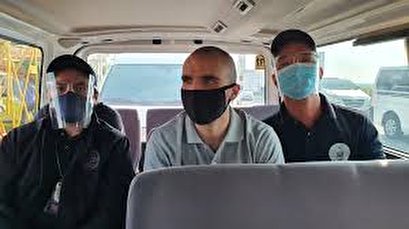 The 25-year-old Marine, Lance Corporal Joseph Scott Pemberton, was convicted of killing Jennifer Laude in a hotel in Olongapo outside a former US navy base northwest of the capital Manila in 2014.

He was sentenced in 2015 to a term of six to 12 years for homicide, a sentence that was later reduced to 10 years.

Despite the court ruling, Duterte said on Monday that he granted Pemberton “an absolute pardon.” He was imprisoned in a special detention facility inside a military camp.

On Sunday, the Philippines' Bureau of Immigration (BI) deported Pemberton and the US soldier left Manila’s international airport aboard an American military aircraft bound for his country.

He was accompanied by representatives from the US embassy on his way to the airport, amid tight security measures.

“As a consequence of the deportation order against him, Pemberton has been placed on the Bureau’s blacklist, perpetually banning him from coming back,” BI Commissioner Jaime Morente said in a statement.

A Duterte spokesman said on Thursday that the president’s decision to pardon Pemberton may have stemmed from his desire to get access to coronavirus vaccines being developed by American firms.

Harry Roque claimed that Duterte was “upholding the higher national interest" in pardoning the US Marin.

The US — the Philippines’ former colonial ruler — has sent back its forces to the South Asian county under the Visiting Forces Agreement that has given the US a security blanket for the past two decades.