Sunday, 13 September 2020_Bahrainis have rallied throughout the island kingdom, condemning the ruling regime’s normalization of relations with Israel and setting Israeli flags on fire in defiance of a government ban on protests. 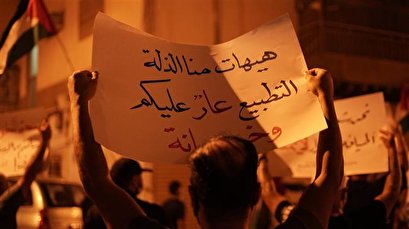 On Saturday, Bahrain's main opposition group, the al-Wefaq National Islamic Society, posted pictures of the rallies that were held in the capital Manama as well as many other places across the country.

Bahrain's normalization of ties with the Israeli regime was announced Friday by US President Donald Trump roughly a month after Washington brokered a deal enabling a similar rapprochement between the United Arab Emirates and the occupying regime.

The US-mediated agreements have been met with uniform condemnation from all Palestinian factions, who call it a "stab in the back" of the Palestinians and sheer betrayal of their cause.

According to reports, Bahrainis rose in protest in the northern villages of Karrana and Abu Saiba, the north-central village Shakhura, the village of Sanabis on the capital’s outskirts, and Sadad Village that lies on the country’s west coast.

They blasted Manama’s intention to open an embassy in the occupied territories, and the reciprocal prospect of an Israeli embassy in Bahrain.

The participants held up Palestinian flags and banners, expressing outrage at the normalization, and set fire to Israeli flags.

'A black day in history of Bahrain'

Former lawmaker Ali al-Aswad, who had resigned in 2011 in response to the government's crackdown on peaceful protesters, called it a "black day in the history of Bahrain."

"You will be reminded by history for your support [of] colonialism and colonization," he said.