Monday, 14 September 2020_Several American deputies are seen pinning a female reporter to the ground in a video of the Black Lives Matter protests in Los Angeles. 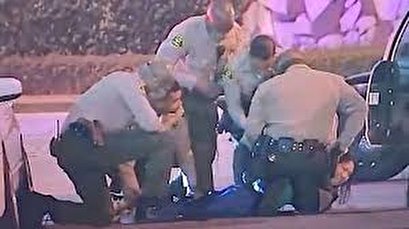 Josie Huang, who writes for LAist and reports for NPR affiliate KPCC, was covering the protest going on for weeks against police brutality and racial injustice.

Huang can be heard repeatedly identifying herself as a reporter and shouting “KPCC” several times. You also can hear Huang yelling: "You're hurting me," Huang can be heard saying, followed by crying out in pain.

The attack took place outside St. Francis Medical Center in Lynwood, where two deputies previously shot were being treated.

Huang was ten handcuffed, and taken to a patrol car .

The award-winning journalist has been accused of obstructing justice as she was "interfering with a lawful arrest," according to Deputy Juanita Navarro of the Sheriff's Information Bureau.

In a tweet a day after the Saturday incident, she said in a tweet that she "was filming an arrest when suddenly deputies shout 'back up.'”

“Within seconds, I was getting shoved around. There was nowhere to back up ...You see my phone clatter to the ground and I start shouting 'I’m a reporter...I’m with KPCC.' I scream for help from the TV reporters I know are around the corner doing their 11 live hits."