Monday, 14 September 2020_The situation remains tense in Belarus, which has been the scene of protest rallies by supporters of opposition, who refuse to accept the official results of last month’s presidential election in the East European country. 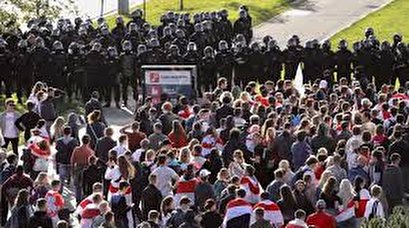 The capital Minsk and several other cities saw fresh anti-government protests on Sunday, as tens of thousands of people poured out into the streets to voice their objection to the results of the August presidential polls, which Alexander Lukashenko won with 80 percent of the vote.

Belarusian police intervened when protesters in the capital tried to make their way into the elite residential area, where top government officials, including President Lukashenko, reside.

Interior Ministry Spokeswoman Olga Chemodanova confirmed that some 400 people had been arrested across the capital on Sunday.

The detainees were carrying flags and placards "of an insulting nature," she explained.

She also confirmed reports that a police officer had fired a warning shot into the air to ward off protesters.

“As policemen were taking several protest activists into custody in downtown Minsk, other demonstrators, at least 100 of them, tried to prevent the arrests,” Chemodanova said. “A warning shot was fired from a slide-action gun into the air to stop the unlawful action.”

Video footage showed heavy police presence near the president’s residence, where armored vehicles and barbed wire were also deployed in anticipation of violence.

Similar rallies were reported in Brest, Gomel, Mogilyev, Baranovichi, Vitebsk, and other cities.

After it was announced that Lukashenko had won a sixth term as president, opposition candidate Svetlana Tikhanovskaya alleged voting fraud and claimed that she had won the election.

She later fled to Lithuania and from there has been directing the protests in Belarus.

Several Western states have thrown their weight behind the opposition protests, threatening Lukashenko with sanctions.