Trump has head 'in the sand' as wildfires rage: LA mayor

Monday, 14 September 2020_US President Donald Trump has been accused of being in denial about climate change as record wildfires have killed 35 people in West Coast states and displaced thousands of others so far. 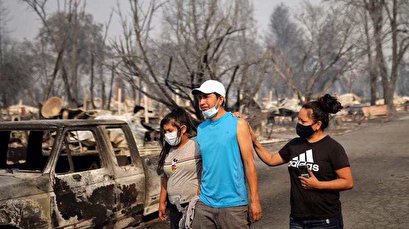 Speaking on CNN's "State of the Union" Sunday, Los Angeles Mayor Eric Garcetti said, "This is climate change, and this is an administration that's put its head in the sand."

This comes as Trump and his political rival Kamala Harris prepared to meet emergency workers in California.

Trump will meet with the heads of California's emergency services on Monday and Harris will also travel there to assess the damage and meet fire officials.

Harris, the Democratic vice presidential candidate tweeted that Trump "denied evidence" the flames were "fueled and intensified by the climate crisis."

For three weeks, fires have been raging in Oregon, California and Washington, burning land and destroying homes. Tens of thousands of people have had to flee the areas with the US National Weather Service issuing a "red flag warning" as high winds threaten to spread devastating fires still further.

Of the people killed due to the infernos since the beginning of summer, 27 died this week alone with dozens still missing on Sunday.

Trump has not talked much about the blazes in recent weeks, but at his campaign rally in Nevada on Saturday, he acknowledged the scope of the calamity.

"They never had anything like this," said the president, who systematically downplays global warming. "Please remember the words, very simple, forest management."

Garcetti responded to the comments by saying that "anybody that lives in California is insulted by that."

"Talk to a firefighter if you think that climate change isn't real... This isn't about forest management or raking."