Monday, 14 September 2020_UN High Commissioner for Human Rights Michelle Bachelet has warned that Myanmar’s ongoing targeting of the persecuted Rohingya civilians in their homeland of Rakhine ‘may constitute further war crimes or even crimes against humanity.’ 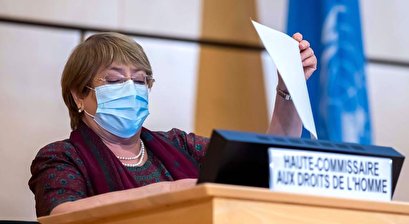 Speaking at the opening of the 45th Human Rights Council in Geneva on Monday, Bachelet rued the abuses against the Rohingya and other minorities in the country.

“People from the Rakhine, Chin, Mro, Daignet and Rohingya communities are increasingly affected by the armed conflict in Rakhine and Chin States,” UN official said, adding, “Civilian casualties have also been increasing. In some cases, they appear to have been targeted or attacked indiscriminately, which may constitute further war crimes or even crimes against humanity.”

The UN official also pointed to “disappearances and extra-judicial killings of civilians; massive civilian displacement; arbitrary arrests, torture and deaths in custody; and the destruction of civilian property.”

Satellite images and eyewitness accounts, she said, indicated that areas of northern Rakhine had been burnt in recent months.

The UN rights chief lamented that no concrete measures had been taken by the government toward accountability for the “terrible human rights crisis” inflicted upon the Rohingya by the military operations in Rakhine which started three years ago.

Bachelet said government administrators were now reclassifying areas where Rohingya villages were previously located, removing the names of villages from official maps and potentially altering how the land may be used.

“This should end immediately, and the prior situation should be restored.”

“This only underscores the need for independent, on-the-ground investigation.”

Military operations in 2017 forced some 750,000 Rohingya from homes in the conflict-torn Rakhine state to Bangladesh.

Myanmar's military has always justified its 2017 operations as a means to root out Rohingya ‘militants’ after attacks on about a dozen security posts and police stations. The Rohingya are widely seen as illegal immigrants in Myanmar, denied the right of citizenship.

Elsewhere in her remarks, Bachelet highlighted that most Rohingya will not be able to vote in the forthcoming November elections, branding the situation as “disappointing.”