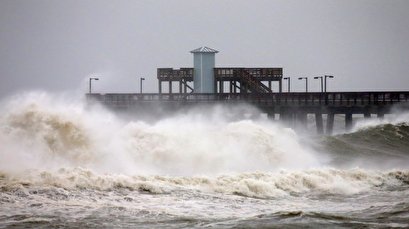 Sally could hit the Alabama, Florida and Mississippi coasts on Tuesday night or early Wednesday causing massive flash flooding and storm surges of up to 7 feet (2 meters) in some spots, the National Hurricane Center (NHC) said.

Its languid pace recalls 2017's Hurricane Harvey, which dumped several feet of rain over a period of days on the Houston area, causing major damage.

More than 2 feet of rain was expected in some areas, with "extreme life-threatening flash flooding likely through Wednesday," an NHC forecaster said.

About half the 38 rooms had guests, and the hotel was stocked with flashlights, batteries, bottled water and canned food, she said.

“The wind has definitely picked up and some of the streets are starting to flood. I definitely wouldn’t go outside unless you had to.”

Sally will slow even more after landfall, causing Atlanta to see as much as 6 inches (15 cm) of rain through Friday, said Jim Foerster, chief meteorologist at DTN, an energy, agriculture and weather data provider. "It’s going to be a catastrophic flooding event" for much of the southeastern United States, Forester said, with Mobile to the western part of the Florida Panhandle taking the brunt of the storm.