Wednesday, 16 September 2020_A Katyusha rocket has hit an area in Baghdad’s Green Zone, which houses government buildings and foreign missions, including the US embassy, an Iraqi security source says. 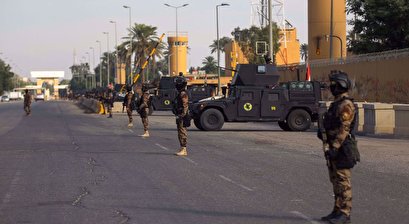 Iraq’s Security Media Cell reported that the rocket attack, which took place on Wednesday, caused no casualties or damage.

Reports said the American forces closed the doors of the US embassy following the incident.

No group has so far claimed responsibility for the attack.

On August 16, at least four Katyusha rockets were fired at the US embassy in the heavily fortified area, one of which landed in an area where American troops are stationed at the diplomatic mission.

Anti-American sentiments have been running high in Iraq since the US assassinated Iran’s anti-terror commander Lieutenant General Qassem Soleimani, and the deputy head of Iraq's Popular Mobilization Units, Abu Mahdi al-Muhandis, in Baghdad on January 3.

Iraqi resistance groups have pledged to take up arms against US forces if Washington fails to comply with the parliamentary order.