Al-Nujaba: Palestine is the light of Resistance/ traitorous Arab regimes have kinships with Zionists

Wednesday, 16 September 2020 (YJC)_ In a statement, mentioning that Arab Regimes like UAE and Bahrain were formed in the womb of England and brought up in the hug of the US and they have kinships, al-Nujaba Islamic Resistance stressed that Palestine remains the axis and light of the Resistance. 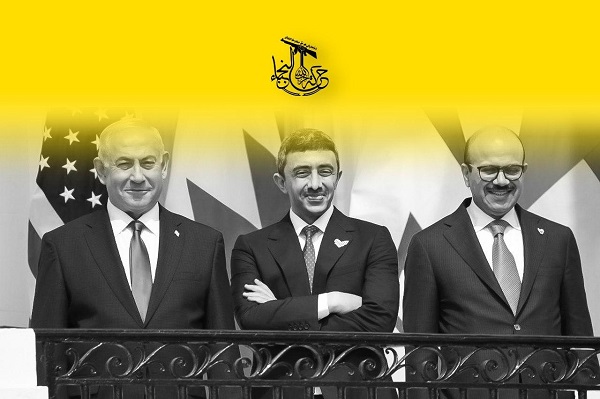 Al-Nujaba Islamic Resistance, issuing a statement, described the day on which the UAE and Bahraini regimes compromised with the Zionist Regime “A black day in the history of Arab-Muslim Ummah” that caused the growth of the Israeli cancer gland in the body of the Ummah, reported al-Nujaba’s Centre for Communications and Media Affairs in Iran.

Al-Nujaba’s statement calls the UAE and Bahrain two frail regimes whose weak rulers signed the treaty of surrender and defeat.

Then, mentioning that this traitorous act was not unexpected, the statement maintains, “These Regimes and the Zionist one have been developed in the womb of England and brought up in the hug of the US and this kinship leads to their unity under the pretext of peace.

Al-Nujaba Movement reiterated, “These Arab Regimes have never fought against Israel, besides, they have avoided any verbal attack against this regime; they have long frustrated any attempt made on the unity of the Ummah and destroyed the noble, revolutionary and Jihadi forces, furthermore, they have mobilized all their financial means for the development of terrorism and ruining large and influential states like Iraq, Syria, Lebanon, Tunisia, Algeria, Sudan and Yemen.

The mentioned statement, criticizing the marginalization of the rights of the Palestinian nation in the course of treaties like Camp David and Oslo, expresses, “During two past decades, the compromising regimes, in order to maintain themselves and distract the Muslim Ummah from the evil acts of the occupying regime of Quds, did sectarianism, provoking divisions, extremism and supporting terrorist groups like al-Qaedeh and the ISIS so as to help the strategic dominance of Israel and destroy anti-Zionism resistance.