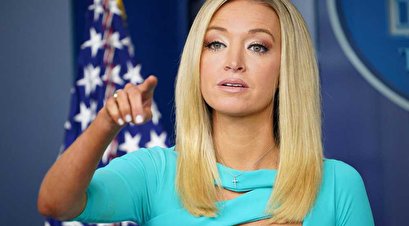 US President Donald Trump has been promising for months to unveil a health care plan amid the poor response to the coronavirus pandemic.

"Here at the White House, we have a wide array of people working on it. There have been elements of it that have already come out," McEnany said, citing executive orders this year on telemedicine and drug pricing. "There’s more that will be forthcoming."

Trump has been bragging about a vague comprehensive plan as criticism mounts on his administration's handling of the pandemic.

The White House press secretary claimed that the "domestic policy council and others are working on a health care plan."

Pressed by the CNN reporter to divulge more details, McEnany said she should take a job there to learn more.

"I’m not going to give you a readout of what our health care plan looks like and who’s working on it," she said. "If you want to know, come work here at the White House."

At a news conference meanwhile, Trump broke with one of his top health officials before reporters, saying Centers for Disease Control and Prevention (CDC) director Robert Redfield made a “mistake” when he said the coronavirus vaccine would not be available until at least mid-2021.