Turkey ‘open to constructive dialog’ with Greece in maritime dispute 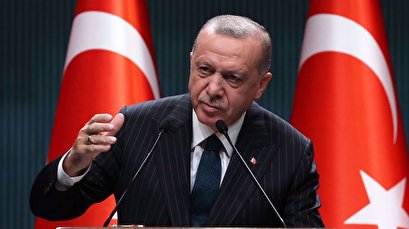 Erdogan made the remark in a video-conference call with German Chancellor Angela Merkel on Wednesday, adding, however, that his country would remain “determined” in the dispute.

Germany has been attempting to mediate between fellow-NATO members Turkey and Greece.

Erdogan told Merkel the dispute “could be resolved through negotiations… provided that a constructive approach, based on fairness, prevails,” Erdogan’s office said in a statement.

The Turkish president “underscored he will continue to implement a decisive and active policy with regard to Turkey’s rights.”

The phone conversation came ahead of an emergency meeting of European Union (EU) leaders next week, where the bloc will discuss imposing sanctions on Turkey over its search for energy in waters claimed by Greece and Cyprus.

Tensions between Greece and Turkey spiked after Ankara resumed energy exploration work in a disputed area of the eastern Mediterranean last month. Turkey has withdrawn a seismic research vessel from waters disputed with Greece for maintenance, but ties have remained strained.