Thursday, 17 September 2020_The Supreme Council of the World Assembly of Islamic Awakening condemned the UAE and Bahrain’s move to establish ties with the Zionist regime, calling on all Islamic nations and governments to support the cause of Palestine until ultimate victory against Israel. 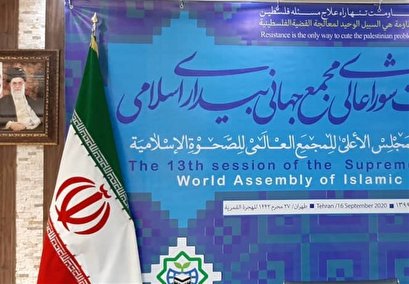 The 13th session of the Supreme Council of the World Assembly of Islamic Awakening was held as an extraordinary meeting via videoconference at the central office of Tasnim News Agency in Tehran on Wednesday.

The webinar, attended by more than 50 experts from various Islamic nations, was held as an extraordinary meeting to discuss the United Arab Emirates and Bahrain’s recent decision to normalize ties with the Zionist regime of Israel.

The final statement of the online meeting has condemned the US-initiated deal of the century and the plans for normalization of relations with the Zionist regime, calling on all Muslim, freedom- and justice-seeking people, groups, parties, currents and governments in the world to provide full support for the cause of Palestine and help the oppressed Palestinian people until ultimate victory against the usurping, cruel and child-murdering Zionist regime.

The governments of Abu Dhabi and Manama have agreed to normalize ties with Israel as part of a diplomatic push by US President Donald Trump.