A glance to the life of Khalil Oghab: “The father of Iranian circus”

Thursday, 17 September 2020 (YJC)_"Khalil Oghab" has become renowned across Iran and worldwide and is named to be the “father of Iranian circus”. 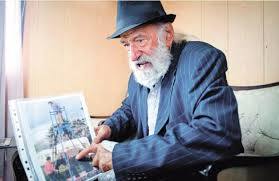 Born Khalil Tariqat Peyma in 1924, periviously acted as a stuntman in different world countries and set a record which is far to be broken.

Oghab was well-known for bending heavy metal beams, scrolling, support feats and getting ran over by cars. In his years of performing, he was able to attract a crowd of as much as 50,000 people in a single event in the 1960s.

Then, after about 20 years, Khalil Oghab settled down in Italy and founded a circus called “Iran and Italy”. He has performed athletic performances in more than 37 countries.

after being invited by the Iranian government, Oghab came back to Iran in 1991.

In 1971, his name was put on the list of Guinness World Records when he carried 450 kg in teeth. He says he is proud of his work because it made Iran glorified once again.

As he said, he was in England when lifted a 1.4-ton elephant. English newspapers names him “an Iranian prodigy”.

He recently announced that a documentary about him, his life and his achievements will be screened in next months.

Pahlevan Oghab, 96, says he is living with his wife and in good conditions in southern Iranian city of Shiraz.