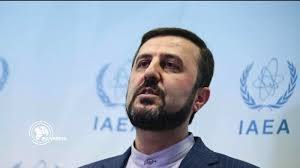 Iran’s Ambassador to the Vienna-based international organizations, Kazem Gharibabadi, named the Nuclear incident happened in early July the dangerous one.

He made the remark in his report on Thursday to the seasonal session of the Board of Directors of the International Atomic Energy Agency.

He said that “Iran has the most transparent peaceful nuclear program among the Agency’s Member States as we can see just 22 percent of the Agency’s global inspections alone is conducted in Iran”.

Elsewhere in his speech he emphasized that “since few adversaries of the JCPOA could not find any issues in the recent years to destroy the JCPOA and cooperation between Iran and the Agency, they have tried in vain to build their arguments upon unfounded, baseless allegations. Nevertheless, it is upon the Board of Governors and the Agency’s Secretariat to show necessary wisdom and foresight to avoid getting entangled in their mischief."

"To conclude," Gharibabadi said, "my delegation would like to restate its confidence that the implementation of the verification activities requires both sides to cooperate in good faith. “Respect” and “trust” are established during times, but could be shattered in a matter of seconds. In this context, the Agency is highly expected to continue to carry out its mandate in a professional, independent and impartial manner away from any undue pressure or interference."