Friday, 18 September 2020_Belarusian President Alexander Lukashenko has announced plans to put the nation’s military on high alert as well as closing its borders with Poland and Lithuania amid rising hostility from the US and its European Union allies. 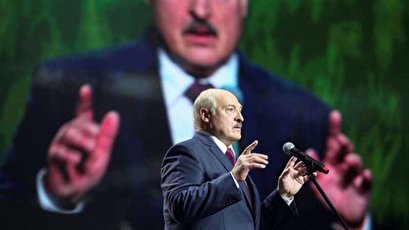 "We are forced to withdraw troops from the streets, put the army on high alert and close the state border on the west, primarily with Lithuania and Poland," Lukashenko declared Thursday during a women's forum following his repeated insistence that the wave of protests after his re-election was driven by the West.

"I don't want my country to be at war. Moreover, I don't want Belarus and Poland, Lithuania to turn into a theater of military operations where our issues will not be resolved," he further emphasized. "Therefore, today in front of this hall of the most beautiful, advanced, patriotic people I want to appeal to the peoples of Lithuania, Poland and Ukraine — stop your crazy politicians, don't let war break out!”

The Belarusian president also pointed out that the country’s border with Ukraine would be strengthened as well.

The development came as the US and the EU have undermined the Belarus presidential poll as  neither free nor fair and demanding that Lukashenko enter into talks with the Western-backed opposition — a call that he has rejected.

Washington and Brussels have further been contemplating on imposing sanctions against Belarusian officials for alleged vote-rigging and their response to violent protest rallies following the election in which he defeated his rivals by 80 percent of the vote.

Moreover, the European Parliament on Thursday, overwhelmingly passed a resolution discarding the official election results and proclaiming that it would not recognize Lukashenko as the legitimate president once his current term expires November 5.