China kicks off another military drill as US envoy visits Taiwan

Friday, 18 September 2020_China has launched military drills near the Taiwan Strait as a senior US official is visiting the self-ruled island in Washington's latest move to bolster its support of the island in defiance of Beijing. 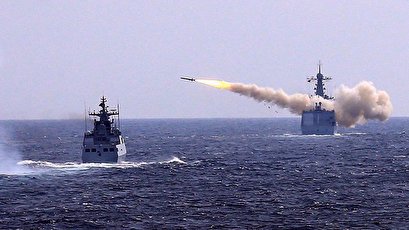 “They are a reasonable, necessary action aimed at the current situation in the Taiwan Strait and protecting national sovereignty and territorial integrity,” Ren said.

Ren also warned that trying to “use Taiwan to control China” or “rely on foreigners to build oneself up” is wishful thinking and doomed to be a dead end.

“Those who play with fire will get burnt,” he added.

The Chinese spokesperson gave no further details about the military exercises, but the Taiwanese defense ministry said on Thursday that China was sending two anti-submarine aircraft into the island’s air defense identification zone.

China has sovereignty over Taiwan; and under the “One China” policy, almost all world countries — including the United States — recognize that sovereignty.

Although Washington has no formal relations with Taipei, it is the island’s largest weapons supplier and an avid backer of Taiwan’s secessionist president.

On Thursday, US Undersecretary for Economic Affairs Keith Krach arrived in Taiwan. He is expected to meet with Taiwanese President Tsai Ing-wen on Friday.

According to the Taiwanese foreign ministry, Krach is the highest-level official from the State Department to visit the island in decades.

China has already filed a formal complaint with the US over the visit.