1,500 protest in Argentina against eviction of homeless people

Friday, 18 September 2020_Around 1,500 people protested in the streets of downtown Buenos Aires against the eviction of homeless people who, affected by the economic crisis that worsened with the coronavirus pandemic, occupied suburban land with precarious homes. 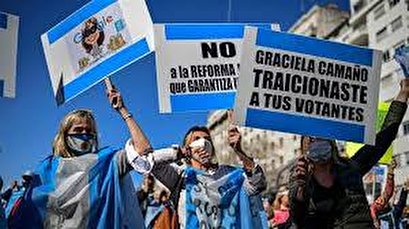 Thousands took to the streets of Buenos Aires on Thursday, to protest the eviction of homeless people who have settled in precarious homes in the suburbs of the city.

The protest took place against the backdrop of the announced eviction of over 2,500 families which have settled across 100 hectares of land in Guernica, 25 km (15 miles) south of Buenos Aires, as well as the dire economic situation among people involved in the fight against the coronavirus outbreak. The eviction is set to take place on September 23.

The protesters could be seen marching with banners and placards up to the Plaza de Mayo, where they heard various activists take turns to hold a speech on a stage.

Fabiana Goimez, who lives on land in Guernica, said, "And to show that even if there are evictions or repression by the police, because if we receive a lot of harassment from the police who do not allow us to take boxes in, nor fire wood, nor water, nor food, we will continue to fight for our piece of land." Copied from page https://www.ruptly.tv/en/videos/20200918-005-Argentina--Thousands-protest-planned-eviction-of-homeless-people-amid-economic-crisis-in-Buenos-Aires