Saturday, 19 September 2020 _US Secretary of State Mike Pompeo has pounced on an opportunity during a South American tour, which has been blasted by Venezuelan President Nicolas Maduro as a “war-mongering” visit, to ramp up pressure on the leftist leader to resign. 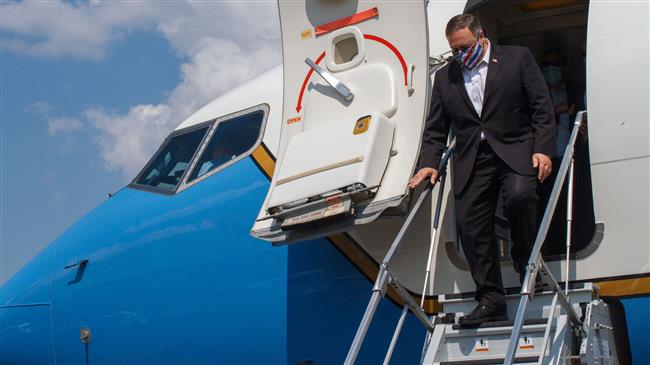 During the second leg of his three-day Latin American tour, Pompeo visited on Friday a refugee center in the town of Boa Vista, Brazil, on the border with Venezuela, putting on an insincerely sympathetic face as he underlined the plight of the nearly five million Venezuelans who have been forced to leave the country due to economic crises triggered by illegal US sanctions against the government in Caracas.

"Those people I talked to today are desperate to return home," Pompeo said of the refugees being processed at the center — among the estimated 260,000 Venezuelans who have entered neighboring Brazil.

"They want what all human beings want; dignity, they want a democratic, peaceful, sovereign Venezuela to call home, one where they and their children can find jobs," he added.

Pompeo accused Maduro of destroying his own country and labeled the Venezuelan president “a drug trafficker," referring to baseless charges the US Justice Department filed against him and several of his close allies earlier this year.

"We know that the Maduro regime has decimated the people of Venezuela, and that Maduro himself is an indicted narcotics trafficker,” the US diplomat claimed. “That means he has to leave.”

In what was described by Caracas as the “desperation” of the “Washington elite,” the US State Department indicted Maduro for 18 charges in March, alleging that he and his allies had supervised a years-long shipment of narcotics into the US.