US: an officer who pepper-sprayed a seven-year-old child is cleared

Saturday, 19 September 2020 (YJC)_ the Seattle police cleared the officer who pepper sprayed a seven-year old child as he was not his target. 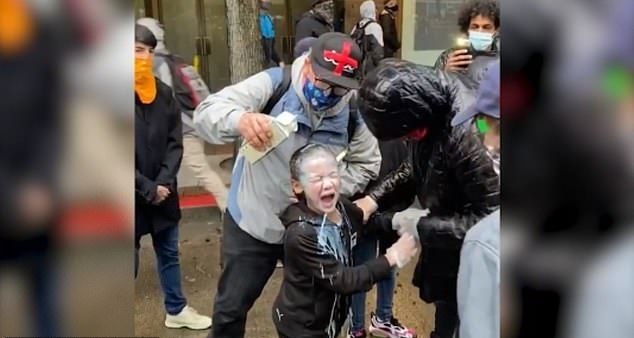 The Seattle police watchdog decided Friday that an officer who pepper-sprayed a seven-year-old child during an anti-racism protest did not violate the department's policy.

The Office of Police Accountability received 13,000 complaints after a video of the boy screaming 'I can't see' while being doused in milk by other protesters went viral following a May 30 demonstration.

OPA Director Andrew Myerberg deemed that the officer had not intended to hit the child and did not realize the boy was in his line of fire when he started to pepper-spray a woman standing immediately in front on him.

Myerberg described body-cam and social media footage of the incident as 'heartbreaking' but claimed that it did not mean that the officer was guilty of excessive use of force.

'Contrary to the popular narrative surrounding this case, the Child was not individually targeted with pepper spray by an SPD officer,' he wrote.

He added that the officer was also full of regret over the incident.

'The picture of the Child standing in the middle of the street, crying, with milk running down his face is an unforgettable image from these demonstrations,' Myerberg wrote.

'That the Child suffered this trauma is something that OPA is extremely sorry for and that no decision in an administrative investigation can ever remedy.'

The highly publicized incident took place outside Westlake Plaza in Seattle during one of the first Black Lives Matter protests in the city following the killing of George Floyd during arrest in Minneapolis on May 25.